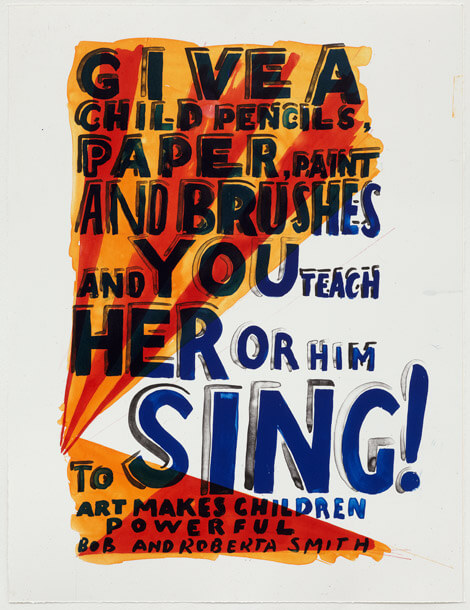 Art, for Bob and Roberta Smith, is an active agent for change. Often incorporating hand-painted signs on found and scrap materials, Bob & Roberta's work personalises the political causes he espouses.

In a letter to Michael Gove in 2011 Bob & Roberta wrote "from birth Human beings seek to understand, find their place in society and control their worlds. Through looking and understanding the child interprets the world. Give a child a piece of paper, a brush and some colour and you put them in control. Children's art is so appealing because they have no problem with being in control of images. As school progresses, poor teaching in some schools, impresses on the child that they are not in control. Not only are they not in control, but they are the most insignificant cog in a system of control in which they may never play an important part."

Appropriating the languages of folk, punk and the alternative protest movements, sloganeering infuses his performances and installations. Encouraging a participatory response from his audience, similar to that used by the Fluxus in the 1960's, his work incorporates a brand of anti-authoritarian humour that sits somewhere between irony and sincerity.

Impossible to be contained within one genre, Bob and Roberta Smith's work often incorporates the language of the hobby, be it music, cooking or DIY, and uses them to demolish established values and respected authorities, which he believes are often used to beat out individual creativity.